The United States Postal Service (USPS) is run independently despite being part of the US government and is responsible for managing the postal service needs of the entire nation. Letter and mail carriers from the US Postal Service (USPS) carry 660 million mail pieces to over 142 million locations across the nation every day according to government data. Data up to 2014 reveals that the USPS operates 31,000 post offices, delivering an annual number of 155 billion mail pieces.

These mail delivery numbers are astonishing and yet the efficiency of operations remains impressive until the number of letter carriers suffering from slips, trips, and falls is revealed. Letter carriers cover big distances every day and use different mediums of transport to deliver mail, cycling, driving and walking all of which come with their own set of dangers. The risks increase exponentially when you throw heavy bags of mail and packages into the mix. Unfortunately, letter carriers are at risk of multiple injuries during their working lives with a majority of them related to the delivery of mail itself.

What Are The Common Causes Of Slips And Falls For Letter Carriers?

Letter carriers face all kinds of threats when delivering mail to different houses, commercial properties, and offices, from aggressive dogs and broken staircases to slippery floors and motorway accidents. Slips, falls and trips result in a large majority of accidents in industries and cause 15 percent of accidental deaths second only to motor vehicle causing fatalities. Below are some common causes of slip and fall accidents specific to letter carriers.

On The Ground Slip Accidents

Letter carriers walk a lot from one place to another, especially when they are delivering mail in urban cities with limited parking spaces. They often have to park their vehicles at a distance and cover multiple streets on foot to deliver mail to recipients. This can end up posing a significant risk to them, as they have to navigate through multiple terrains with heavy bags and packages to get mail delivered on time. The problem gets infinitely worse in cold winters where the ground is slick and filled with ice, which results in slips and falls on the ground. Heavy packages could also affect a normal line of sight and could cause letter carriers to lose balance while walking on the ground. In normal weather conditions too, issues like uneven sidewalks, debris, potholes, foliage and other obstacles can trigger slip and fall accidents on the ground. They may also be susceptible to slip and fall accidents on office floors if the areas are not properly maintained and remain wet after cleaning.

The problem gets infinitely worse in cold winters where the ground is slick and filled with ice, which results in slips and falls on the ground. Heavy packages could also affect a normal line of sight and could cause letter carriers to lose balance while walking on the ground. In normal weather conditions too, issues like uneven sidewalks, debris, potholes, foliage and other obstacles can trigger slip and fall accidents on the ground. They may also be susceptible to slip and fall accidents on office floors if the areas are not properly maintained and remain wet after cleaning.

Apart from ground slip and fall accidents, letter carriers are in danger of slipping and falling on offices, commercial areas, and residence staircases. In fact, staircases are often the most common threat for letter carriers because of the added risk of falling from a height. Stairways of post offices, businesses and homes can result in slip and fall hazards for a myriad of reasons:

Any of these circumstances can lead to hazardous slip and fall accidents for letter carriers who need to be extra careful to ensure that they remain safe and injury-free.

The sheer nature of the job requiring excessive walking with bulky bags could cause these slip and fall accidents for letter carriers. They are also undertaking the same tasks over and over again, which could potentially harm their muscles, tendons, and nerves. Carrying and pushing mail and packages could cause them to lose their balance and injure themselves if they slip and fall. For example, a letter carrier with a heavy package could miss steps and slip on the ground or a staircase, causing multiple injuries to him or her. Injuries that can be caused to letter carriers include:

Compensation For Letter Carriers Injured On The Job

As employees of the federal government, letter carriers injured on the job are entitled to medical, hospital and wage payments depending on the extent of the injuries caused. If a letter carrier potentially dies on the job, the family may be entitled to death benefits. Like all other federal government agencies, the USPS provides compensation under the federal workers’ compensation program known as the Federal Employees’ Compensation Act (FECA) and managed by the US Labor Department. This program provides different benefits to letter carriers depending on the extent of their on-the-job injuries. Some of the benefits provided include:

Homeowners and offices may also be liable for injuries if the slip and fall accident took place on their premises. But the accident should have been caused by some type of dangerous situation on the property that presents a risk to the person (letter carrier in this case). In order to have a case here, the letter carrier needs to prove that the homeowner or building management was well aware of the dangerous situation and did nothing to rectify it. If this case can be proven, then the letter carrier may be able to claim liability against a business or a homeowner, but this is determined on a case by case basis. Letter carriers are entitled to safe working environments, and that includes people’s homes and offices.

According to the National Association of Letter Carriers (NALC), occupational safety and health is protected under the Occupational Safety and Health Act and the National Agreement’s Article 14. The NALC is the only representative for letter carriers in the United States. Letter carriers who fear they may have suffered the short end of the stick when it comes to workers’ compensation claims can take up their cause with the NALC. 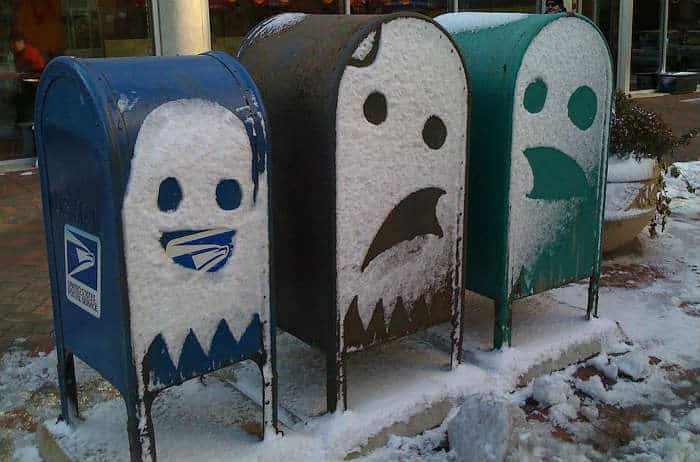 Any slip and fall injuries to letter carriers take a workload and financial toll on the postal service, costing them thousands of dollars in claims and loss of productivity.

In a direct communication to homeowners and offices, one U.S. Post Office at Bemidji asked customers to clear snow from curbside boxes, so that postmen can deliver mail without any danger. They also requested for clear walkways to ensure that slip and fall accidents are kept to a bare minimum.

Similarly, the Alpena U.S. Post Office has also sent out advisory letters to homeowners asking them to move letterboxes from the top of staircases to the bottom of them to prevent the possibility of slipping and tripping on them, since postal workers don’t have to climb up them to deliver mail.

The USPS also encourages postal employees to be judicious when walking in rough or slippery conditions, especially during winters with heavy sleet, snowfall, and rain. Some postal districts also enforce additional safety measures like grip-soled shoes for better traction while walking on slippery and dangerous surfaces, but this is not necessarily applied in all the US states.

Letter carriers who suffer from slip and fall accidents while working or when delivering mail can consult with professional lawyers and will need to follow certain steps to ensure they are properly compensated for their injuries.