What Is An “Invisible Wet Floor” In A Slip And Fall Case?

Home/Slip & Fall/What Is An “Invisible Wet Floor” In A Slip And Fall Case?

What Is An “Invisible Wet Floor” In A Slip And Fall Case?

In March 2017, a woman from Allegheny County in Pennsylvania was awarded $2.1 million for a slip-and-fall accident that occurred four years ago at a Target department store. However, what makes this case unique is that the employees at this Target seemed to take all of the precautions that would have nullified any lawsuit from any customer who was in the store that day. Despite the best efforts of the employees, mistakes were made and the world was given a lesson in just how precise slip and fall guidelines can really be.

Woman Slips And Falls On An Invisible Wet Floor 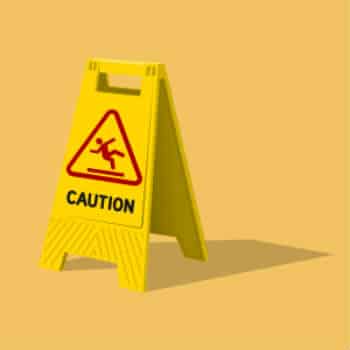 In December 2013, a lady who worked for a national television broadcasting company had gone to the Allegheny County Target to pick up supplies for the crew. As she entered the store, there was an accident with some soft drinks that required an immediate mop and clean job. Employees did their job and put warning signs around the affected area to keep customers away, and then they began mopping the spill.

Where this story starts to go off into uncharted territory is when the employees mopping the area were sloppy in their work and allowed a significant amount of cleaning material to get well outside the marked off area. This created an invisible wet floor that was difficult for customers to see with the store lighting. The victim claimed that she walked around the signs as she was supposed to, but slipped on the invisible wet floor created by the careless employees and tore her hamstring.

Target claims that the woman walked through the area marked off by the signs and fell on the cleaning material that was being used. Since no video evidence was introduced, it became a matter of the victim’s word against Target’s. The jury believed the victim’s story, and the result was the $2.1 million award.

How Did Target Lose?

The core of any slip and fall case is whether the property owner took all necessary steps to create a safe environment, and whether or not the victim followed instructions and complied with any warning signs that were posted. On the surface, it seems like the Target employees did their jobs and did what they should have to do to avoid a case of store negligence. But a closer look will show us that the injured customer was definitely the store’s fault and the verdict was correct.

According to the story told in court by the victim, the store employees put in only a half-hearted effort to make conditions safe for customers. They did put down their warning signs to warn of a wet floor, but then they were careless in applying the wet solution and created an area larger than the area created by the signs. The victim did follow the instructions on the signs, but she wound up slipping on the invisible wet floor created by the sloppy clean-up job.

This case lines up with all of the classic definitions of a slip and fall case caused by store negligence.

If you are familiar with slip and fall lawsuits, then you might notice something interesting about this Target case. This case went to jury, which means that negotiating a settlement must have failed. The plaintiff believed that her case was a good one, and the defendant believed that the plaintiff’s story was not true. While it is good for each side to have opinions, going to a jury can be a risky strategy. In this case, Target took the risk and wound up losing.

The award, in this case, was split into two portions; $1.4 million was for past damages and lost wages, while $700,000 is for future suffering and possible medical treatment. This award by a jury was a combination of lost revenue, medical bills, and pain and suffering. A jury has the right to put any value it wants on a slip and fall lawsuit, and it does not necessarily have to give an itemized breakdown of its award.

In this case, the victim suffered a tremendously painful injury that put her in a large cast for several months. Then she had to endure physical therapy to be able to walk properly. From the information it was given, the jury obviously anticipates that the victim is not fully recovered yet, which would explain the $700,000 award for future damages.

Is An Appeal Possible?

As with criminal court rulings, civil court awards can be challenged through the appeals process. But Target is going to have a difficult time winning an appeal if it cannot prove that something was improper about the original trial. An appeals process is not a matter of simply putting the same case in front of another civil court. There is a separate appeals court that will look the case over and, in most cases, there is no hearing that the two parties can attend when the appeals decision is made.

When a retail store or any public building decides to become careless in its emergency maintenance, it can find itself on the wrong end of a slip and fall lawsuit. The idea of going through the motions to take care of a slippery floor can lead to millions of dollars in problems for the store owner. Workers need to focus on what they are doing, and store management needs to have a precise procedure in place that makes sure that the problem is resolved without any customers getting injured.

Sloppiness Has A Price

At an Allegheny County Target, a spilled soft drink should have been a simple emergency to contain and take care of, but workers got sloppy. They marked off the area of the spill with signs, but then they created invisible wet floors around the area by being careless in their cleaning duties. As a result, a customer was injured and now the Target Corporation is out $2.1 million in a jury award.

Customers also have a responsibility when there is an emergency situation in a store. When customers see warning signs, they are supposed to do what those signs say in order to avoid injury. If a customer ignores the warning signs and gets injured, they will find it very difficult to get a court to award them any damages. But when the customer follows instructions and still gets hurt, then the store can expect that it is going to lose its day in court.