What Is A Herniated Disc?

A herniated disc is an injury caused by the rupture or other lesion in the rubbery cushion found in between the numerous vertebrae that make up the human spine.

Spinal discs are coated with a thick jelly-like fluid that is meant to reduce the friction between two adjacent vertebrae. A herniated disc, therefore, occurs when this fluid leaks, and there is no fluid left to prevent friction. Such leakage occurs when the structural integrity of the disc is compromised, such as by an injury or long-term wear.

Herniated discs can cause constant irritation of the nerves encountered at the intersection of two vertebrae. This irritation is often experienced as a sharp pain that can be quite unbearable for those who suffer from a herniated disc. Moreover, this pain can lead to numbness of the leg and arm and, if it is left untreated, can lead to the weakening of these body parts.

Unfortunately, herniated discs often don’t have any early symptoms which means victims generally don’t have any way of avoiding them. They can also be significantly detrimental as they may lead to numerous other medical conditions and in some cases require surgery.

Treatment for a herniated disc revolves around making sure that the person gets relief from the pain and other symptoms stemming from the herniated disc. This can be accomplished with extended physical therapy to strengthen back muscles, regular medication, and sometimes even invasive surgery. The nature of the treatment will depend on how much pain the individual is experienced, how advanced the injury is, and which treatment options have been tried in the past.

Regrettably, treatment for a herniated disc can be quite expensive, even when no surgical procedures are involved. If someone suffers a herniated disc in an incident such as a slip and fall and they are not liable for this injury, legal action would need to be sought in order to bring justice for the financial expenses as well as the pain and suffering which victims are often subjected to.

Below, we have included briefs synopses on past herniated disc lawsuits.

In one case, a man accidentally fell on a piece of ice on the path leading to his apartment and sustained an injury on his lower back. The ice had accumulated during the previous night’s snowstorm.

Doctors diagnosed him with two herniated discs in the lower side of his back that required immediate surgery. The medical bills amounted to an estimated $87,000 and he ended up with a permanent injury in his spine. The victim also incurred a loss of wages totaling $33,000. Before going to court, he had requested to be compensated with $100,000 and the insurance company was only willing to pay $15,000. A jury ruled in the complainant’s favor and passed a verdict of $615,000.

In another case, an officer was seated on a faulty office chair that broke, and she slipped and fell hurting her back seriously. The slip caused the plaintiff further dislocation of her arm which had broken at an earlier stage in her life. The defendant alleged no liability claiming that the plaintiff was aware of the faulty chair. However, the court jury ruled in favor of the plaintiff and awarded her $86,256 for the damages caused by negligence.

A final slip and fall accident that resulted in herniated discs involved a man who slipped on a plastic bag while going down a flight of stairs towards a subway station. The man’s feet slid from under him causing him to land on his back. The man suffered injuries that included a herniated disc requiring epidural injections and a recommendation for future surgery and he was unable to return to work for a long while after his accident. The man sued against the transit authority which was deemed to have been negligent in leaving trash that could lead to accidents. He was awarded a total of $1,400,000 for his pain and suffering. 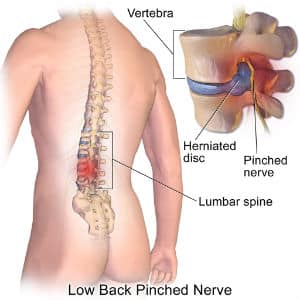 This is due to the fact that every claim is different from the last as well as from the next. The treatment plan for one victim can be completely different from the plan of another individual who has suffered a herniated disc. Additionally, since factors such as lost wages and pain & suffering are calculated on a claim-by-claim basis, these will also be different in different cases.

To understand how your specific circumstances may affect the value of your herniated disc lawsuit, get in touch with our experienced legal team today. We will be able to explain all of your options in a free consultation – so call now and get the answers you need today.